NISA is at an early stage in the development process. It is envisaged that it will be 2022 before any planning application will be brought forward for consideration. We have started with an area that could be considered for this development and created an initial concept design based on visual impact considerations, environmental constraints, and liaison with the local fishing industry.  With this initial concept design, we are now moving forward by appointing Environmental Impact Assessment (EIA) consultants, who will carry out surveys and research in the local area. The information they provide will form the basis of the development of the NISA proposal going forward. 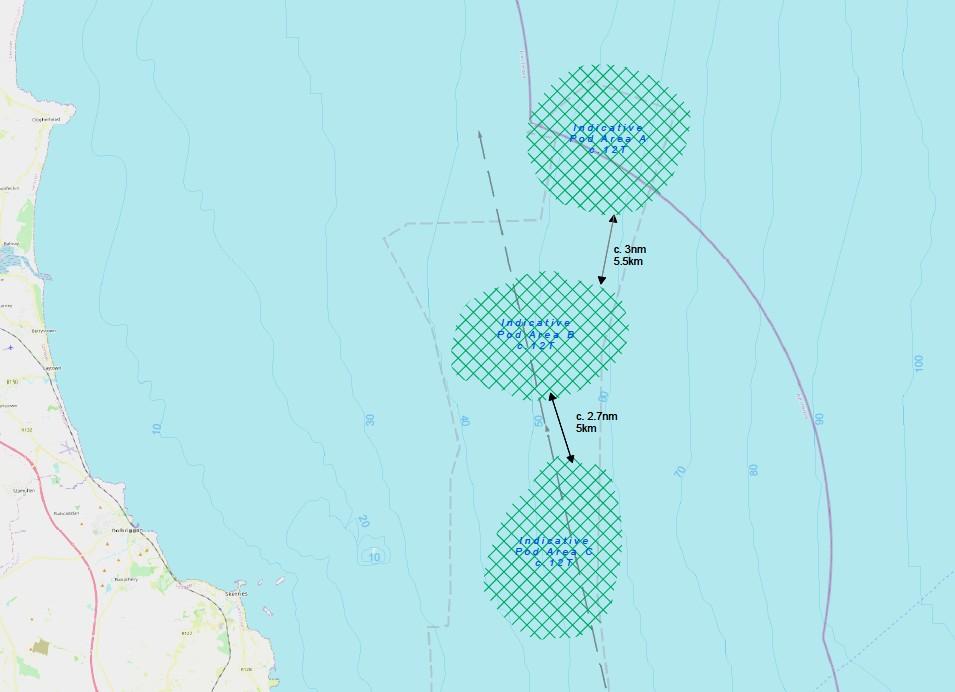 The current layout is based on the concept of developing the proposed turbines in groups or ‘pods’ consisting of 10 to 12 turbines in each pod. This concept was adopted as a result of endeavours to move away from initial design iterations which consisted of significantly more turbines (in excess of 50), arranged in a typical wind farm configuration of a block type layout. Our aspiration has been to move away from this type of arrangement with straight, ‘picket fence’ type view of turbines.

Our current design approach, and that which we intend to bring forward, involves utilising this pod layout approach. In addition to this, by considering turbines with a larger output, we have been able to reduce the number of turbines being considered from over 50 to in the region of 30 to 36 turbines. Each pod of turbines would be spaced in the region of 5km away from each other and we believe that arranging the turbines in this manner will have a dramatic impact on lowering any visual intrusion on the seascape.

This approach was developed following consideration of, not only the visual impact of the project but also the existing fishing practices in the area. With the pod approach, not only will the visual impact aspect of the proposal be improved, but the space between each of the turbines will be such to allow ease of navigation for fishers through the wind farm. This approach will continue to be refined as we continue our studies, surveys and consultation in the area.

While working to establish the most visually appropriate proposal, we have endeavoured to find a balance between placing the turbines as far from the coast as possible (within the area open to consideration) and the implications of developing turbines in deeper waters. We are currently considering the area in terms of distance from the coast but still being suitable for building what are known as fixed base wind turbines. Fixed base turbines can be built in waters up to a depth of 50 to 60 metres. Whilst the design is still a work in progress, it is considered that the closest turbines to the shore on each of the pods will be approximately as follows:

As we continue to refine our design, we will continue to map the distance and layout of the wind turbines in consideration of the visual appropriateness of the local area. 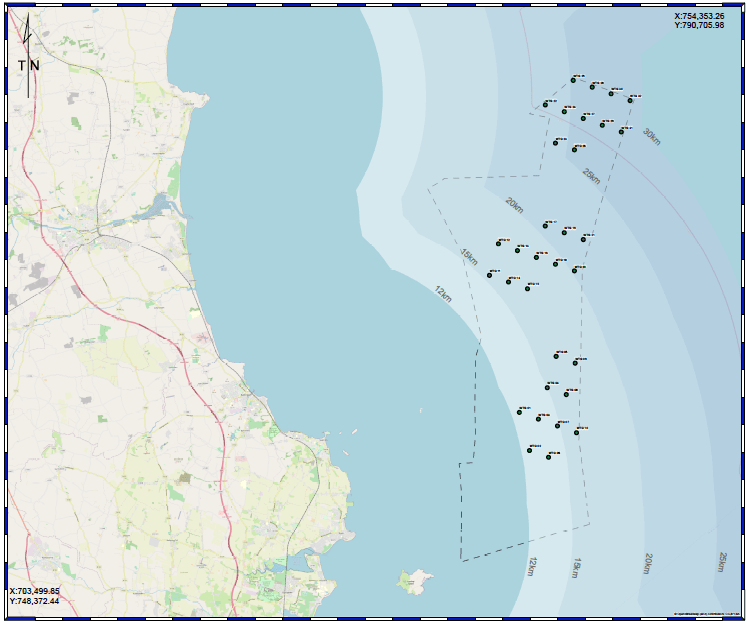 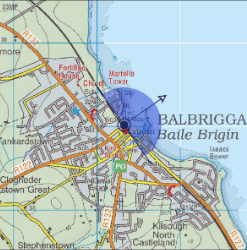 We have created some interactive images of what this project would look like from different locations along the coastline.

These photomontages can be viewed here.

The North Irish Sea Array project is being developed by Statkraft Ireland.

You can find out more about which cookies we are using or switch them off in settings.

With geophysical surveys due to commence shortly, NISA has reached a critical milestone in its development. The surveys planned will provide information which will allow the project to develop a detailed understanding of the sea bed conditions which will inform the design of the project. These surveys are due to start towards the end of May 2022 and will continue throughout June. For more information, please see Marine Notice No. 27 of 2022 through the button below.

Surveys will be subject to weather conditions and a vessel called the Mercator will use various technologies to analyse the sea-bed such as multibeam echosounders, side scan sonars, magnetometers and sub-bottom profiling. The data will be used to inform indicative turbine location and potential cable corridors. The NISA project was granted a Foreshore Licence earlier this year which allows it to gather information and undertake preliminary site investigations to understand the conditions.

Statkraft has engaged an extremely experienced survey contractor to carry out these surveys, particularly in terms of carrying out surveys whilst sharing this marine space with the existing fishing operations. Throughout the surveys, Statkraft will continue to engage all those interested in the local and surrounding communities in the area. This includes extensive engagement with local fishing groups in Howth, Clogherhead, Skerries, Balbriggan, and surrounding areas.

From the earliest stages of this project, Statkraft has been committed to developing a project which would deliver successful coexistence with fisheries and support a sustainable local fishing community. During these surveys it will continue to work proactively towards this goal and promote continued sustainable fishing in the area.

If anyone has any queries please get in touch through our Contact Page.

This website uses cookies so that we can provide you with the best user experience possible. Cookie information is stored in your browser and performs functions such as recognising you when you return to our website and helping our team to understand which sections of the website you find most interesting and useful.

Strictly Necessary Cookie should be enabled at all times so that we can save your preferences for cookie settings.

If you disable this cookie, we will not be able to save your preferences. This means that every time you visit this website you will need to enable or disable cookies again.